The events of Fantasy Final Final Fantasy II-2: Revengeance take place in an imperial hegemony called Fuckburg, the extent of which covers the entirety of a large, unnamed continent. Much of the world's history prior to the rise of the Empire is unknown, as certain magical phenomena linked to the Sustaining Artifacts have caused continent-wide (potentially even global) amnesia, leading to general complacency with the Empire and little way to resist its control. Despite the Empire's near total control of information, some knowledge of the continent's geography, history, and culture still survives, and it's certain more will come to light as the long battle with the Empire continues.

This page will be consistently updated as more information becomes available for compilation. Everyone say thank you Peyton, me love you, mwah mwah mwah!

The unnamed continent controlled by the Empire is a vast landmass with wildly varying geography, biomes, and ecosystems. The continent is separated laterally by a vast mountain range encompassing the Kingdom of Stone, the Kingdom of Fire, and the Badlands, with a large desert known as the Dust in the center. The southern and western expanses of the continent are lush and verdant, consisting of fertile grasslands fed by rivers from the central mountains, warm coasts, and immense tracks of forest across the Kingdom of Wood, Central Wildlands, and Kingdom of Knowledge. 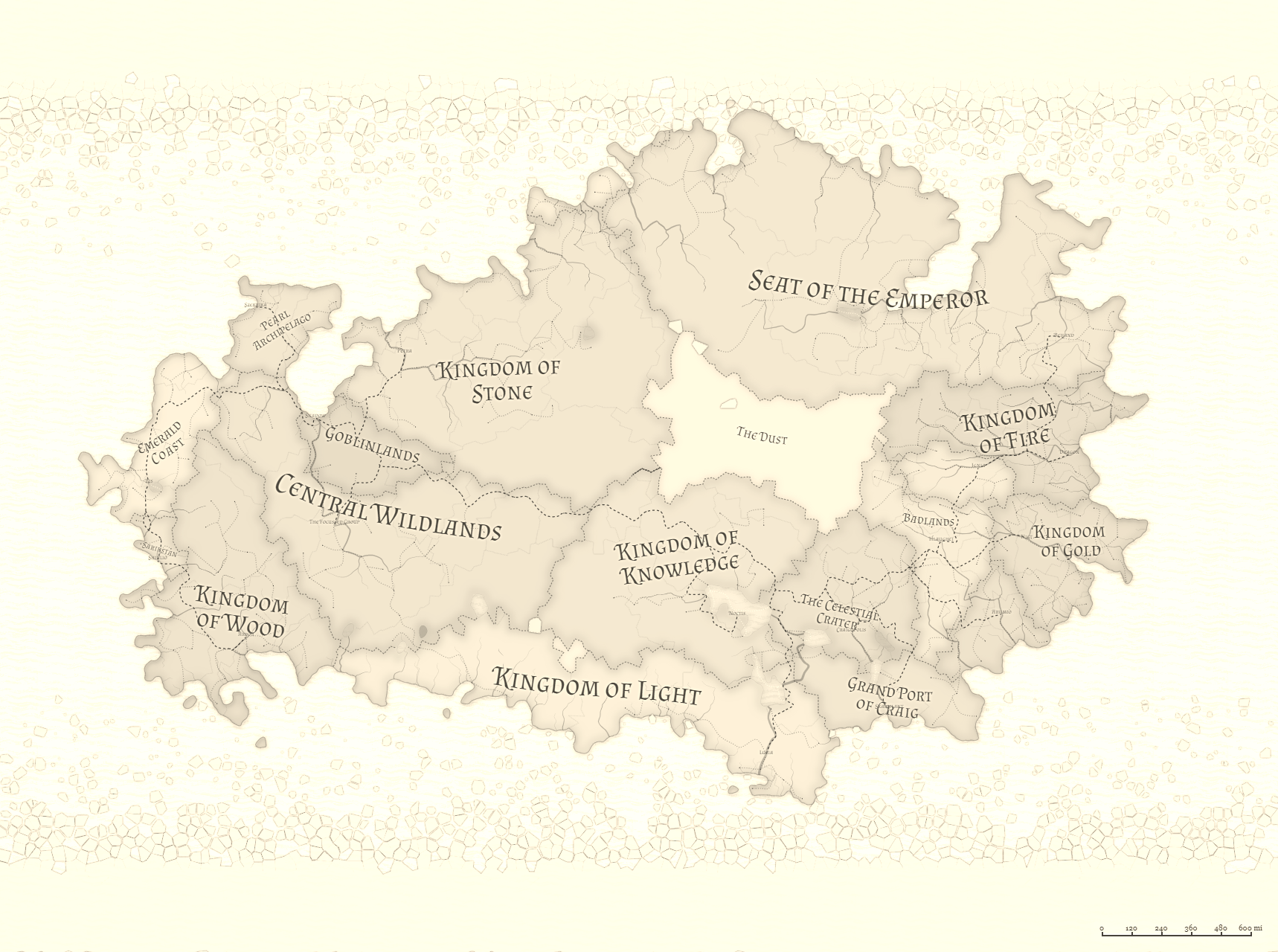 The interior of the continent is dominated by the Dust, trackless expanse of desert home to roving gangs of bandits and strange monsters. This sea of sand lies between the two mountain ranges that divide Fuckburg's southwest and northeast regions. West of the Dust lies the Kingdom of Stone.

The capital of the Kingdom of Stone, the city of Petra, is built out of a massive pillar of stone in the center of a deep basin, making it nearly impossible to invade. From the limited time the Focussed Group spent there, they encountered a sizable population of dwarves in the city, perhaps descendants of the architects and stonemasons who built the city in the forgotten pre-Imperial past; whether or not the party's resident dwarf, Pappy the Troll, is from the region is unknown, as if most of his life story.

The imposing interior desert known as the Dust is notable for being the meeting spot of the Focussed Group, specifically a small outpost called Dust's Edge. Not much else is known about the Dust save the high number of hyenas that live there and apparently love to attack level 1 adventurers.

Arguably the most wild of all the imperial provinces, the realms encompassing Western Fuckburg are well-known for their natural splendor and verdant beauty. The western reaches are dominated by the Central Wildlands, an expanse of ungoverned, temperate wilderness serving as home for the Focus Group. To the north lies a vast redwood forest, fed by the cool northern currents off the Emerald Coast.

The largest city in Western Fuckburg is Arbor, capital of the Kingdom of Wood and former seat of the unnamed royal family Mara once belonged to. Before the imperial takeover, Arbor was a prosperous city, falling into total disarray after the King of Texas invaded and slaughtered the royal family. As of Year 15 Arbor is arranged pyramidically, with the most impoverished homes making up the base, gradually becoming wealthier as one travels upwards. The death of the King of Texas did not rid the city of its troubles, as Santa Claws established a presence in the winter months after the Focussed Group's first mission to the kingdom.

A large population of goblins and elves live in Western Fuckburg, mostly in the Goblinlands and the Kingdom of Wood, respectively. The disparate peoples of the vast region nevertheless share various cultural norms and practices; for example, Mara and Furn, two Westerners, share a knowledge and love of swamp cakes, a delicacy in the forests and swamps of Fuckburg. These cultural similarities have not spared the residents of the Goblinlands from the exploits of adventurers, as explained by a party at the tavern in Ice Hole.

The southern reaches of Fuckburg are considerably less verdant than the western forests due to their proximity to the Dust yet still have much to offer in terms of rich culture and history.

The Kingdom of Knowledge was observed to consist mainly of open grassland and savannah. Despite this, the realm was mostly uninhabited save for a few small villages, such as Ice Hole, and the city of Noctis, sealed behind Megamind's illusion magic. After the illusion was broken, the automatons of Noctis began traveling outside the city, encountering the people who lived in the Kingdom of Knowledge's periphery and introducing them to the myriad technological innovations they had developed, such as automobiles and blue lettuce and tomato.

Similarly to its northern neighbor, the Kingdom of Light is covered in fertile plains and some small mountains at the tail end of the impressive ranges arcing northeast through the Celestial Crater and the Badlands. Aside from Noctis and Lucia, the capital city of the Kingdom of Light, the largest settlement in the region is the Grand Port of Craig, where the infamous Witchlight Carnival appeared at some point during the Emperor's reign.

Delle Belphine is the only party member known to call Southern Fuckburg home. Catgirl tabaxi are the most populous demographic after automatons in the region, their influence spreading from their original village somewhere in the Kingdom of Light to the gambling mecca of Paws Vegas and eventually Lucia itself, where the Catsuka crime syndicate established an iron grip on the population.

The mountainous areas east of the Dust have yet to be fleshed out. However, it can be assumed such regions are rocky, rugged centers of metallurgy and smithing. The Kingdom of Fire is assumed to be volcanic.

The Seat of the Emperor

Nearly the entire expanse of Fuckburg's northern coast belongs to the Emperor's throne province, a massive area of land larger than the kingdoms of Wood, Fire, and Gold combined. Little is known of this region of the continent.

Very little is known of the divine powers of Fuckburg, partially because so much lore of the world was lost when the Shadestorms destroyed, presumably, every other continent on the planet. The first and prime deity is Christian Sebulba who drives the Sun across the sky in a podracer; Sebulba's counterpart, Christian Jesus, has assisted the Focussed Group through the divination spell. Christian Sebulba and Christian Jesus at times unite to form a divine triumvirate in the form of the Holy Spirit, who if I remember correctly is an Italian ghost. Many of Sebulba and Jesus's holy scriptures can be summarized in the divine phrases eechuta and jedi poodoo.

History Before the Empire

It is widely understood that current calendar year is Year 15, with the founding of the Empire taking place in Year 1. Due to powerful arcane interference believed to originate with the Sustaining Artifacts, almost no one in the Empire (except, of course, its rulers) remembers anything relating to the world at large before that date. As such it is difficult to pin down almost any event of historical significance, the entire point of the issue being the Emperor's control of history, memory, and to some extent, time. There are, however, a few key pieces of information uncovered by the Focussed Group during their campaign against the Emperor.

Before the ascension of the Emperor, the regions that would one day become imperial provinces functioned as independent kingdoms. One of these monarchs, Queen Cana, lives in exile as the patron and leader of the Focus Group, the larger organization which employs the Focussed Group. It is presumed her kingdom was what is now the imperial capital, the Seat of the Emperor. The ruling family of the Kingdom of Wood, all murdered save one by Bungalow Jim, most likely represent the majority of the fates of these monarchs. Other regions on the continent, including the Central Wildlands, Pearl Archipelago, and Celestial Crater, were most likely ungoverned by the rulers of the ancient kingdoms. Special attention should be paid to the Grand Port of Craig, which most likely then, as now, served as a major cultural and economic hub free of outside political influence.

The members of the Focussed Group have shown some resistance to the painful amnesia caused by the Emperor and the Sustaining Artifacts, hinting at some forgotten knowledge before their current adventure...

The Sustaining Artifacts are a set of mysterous and incredibly powerful magic items whose very existences are tied to the fabric of reality itself. The core components of the Sustaining Artifacts appear to be highly condensed magical energy, capable of changing forms based on the will and power of the wielder. The Sustaining Artifacts exert powerful wills of their own, corrupting anyone unlucky enough to fall under their influence. So far, only a few members of the Focussed Group and Queen Cana have been able to directly touch the Sustaining Artifacts without succumbing to their power. The effects of the Artifacts' curse can be seen in cases like the King of Texas, who lost his mind and eventually his human form to the Alligator Knives.

There also appears to be a connection between the Sustaining Artifacts and the strange, ichorous substance left behind by many of the Focussed Group's enemies, namely Santa Claws and Megamind, the latter of which became Da Worm. This same substance was observed by Sparrow to be the cause of the destruction in Petra and Arbor after the actions of the Focussed Group in those regions; whether the destruction of the Sustaining Artifacts or the concurrent collapse in social cohesion following the Focus Group's coups is to blame is unknown. This ichor could also be related to the Shadestorm phenomenon witnessed by the Focussed Group in the Lucia Palace throne room.

Currently, there are 4 known Sustaining Artifacts: the Avalanche Glaive, a plate mail gauntlet that granted its wielder, Shin the Conqueror, control over the physical mechanics of earth and stone; the Alligator Knives, twin daggers that could transform into deadly monitor lizards, used to deadly effect by Bungalow Jim; some sort of illusionary crystal that Megamind utilized to imprison the automatons of Noctis; and a set of ten rings that granted Catsuka boss Kiku Matsume control over hardlight. At least two more are believed to exist, one in the Kingdom of Fire, the other in the Kingdom of Gold. It is unknown whether the Emperor himself possesses a Sustaining Artifact.