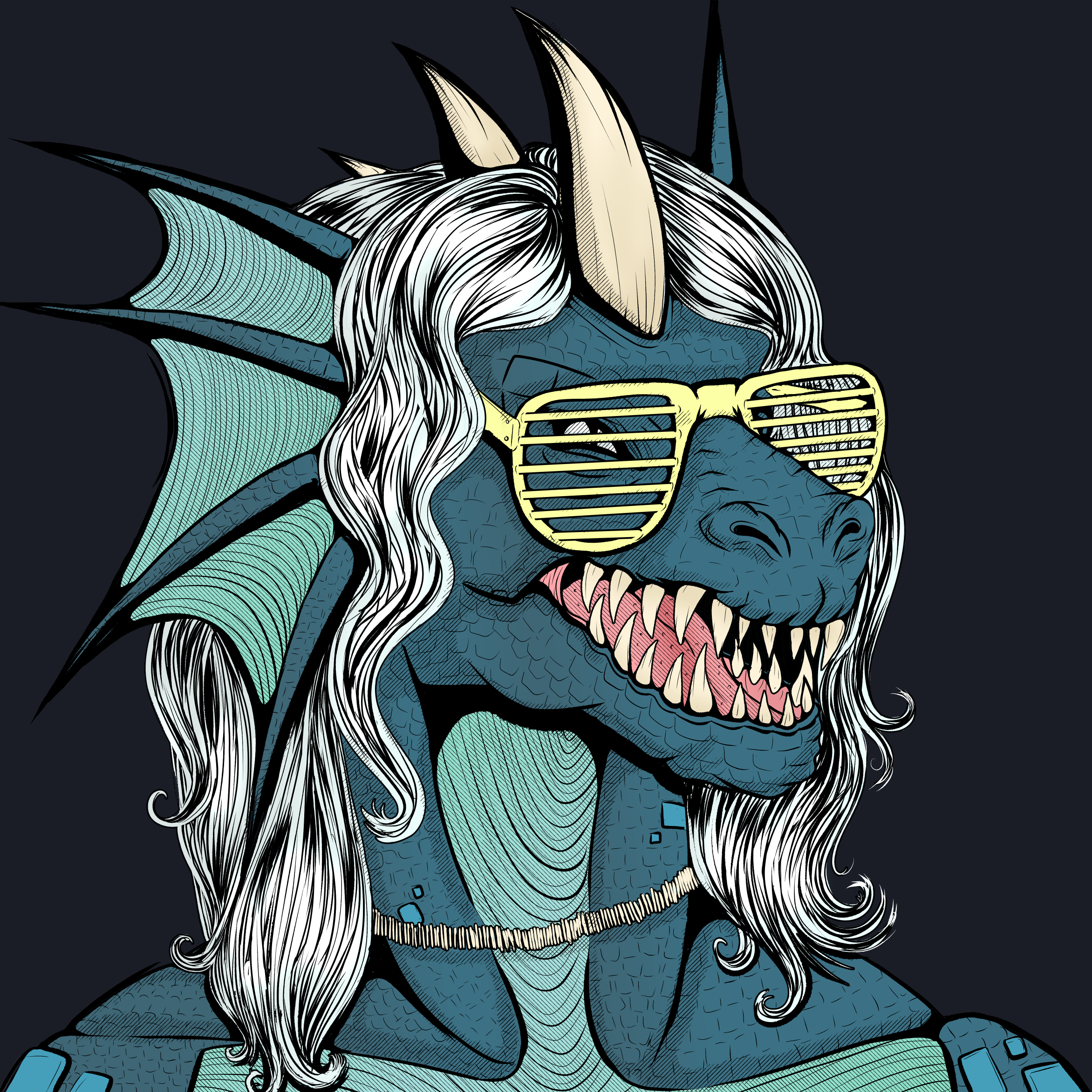 Standing at over seven and a half feet tall, Baja is a dragonborn with blue scales and a beachgoer's laid-back attitude. He usually lets his silvery mane down in a sloppy style and often goes out with his shirt unbuttoned. Baja was originally an avatar of the World Serpent, Jormungandr, who fell in passionate lovemaking combat with his sworn boyfriend enemy, Odin, the Allfather. Thousands of years passed while the divine corpse of Jormungandr lay petrified at the edge of the sea, and thousands more may well have passed had the inhabitants of this new land, Florida, not woken Baja with a mystical chant. Baja usually supports the rest of the party with his charm and buff spells, as well as making use of his bardic inspiration and considerable musical talents. Should danger arise, however, Baja is able to defend himself with a spear and dagger, though for a while he was the weakest member of the party. Should the situation prove dire enough, Baja can spit lightning from his mouth in keeping with his draconic ancestry, as well as transform into a large, powerful serpent form reminiscent of his divine predecessor. Baja also possesses a unique Cloaca of Holding, within which he stores beers. Further study into the exact nature of this cloaca, while sorely needed, is not recommended. 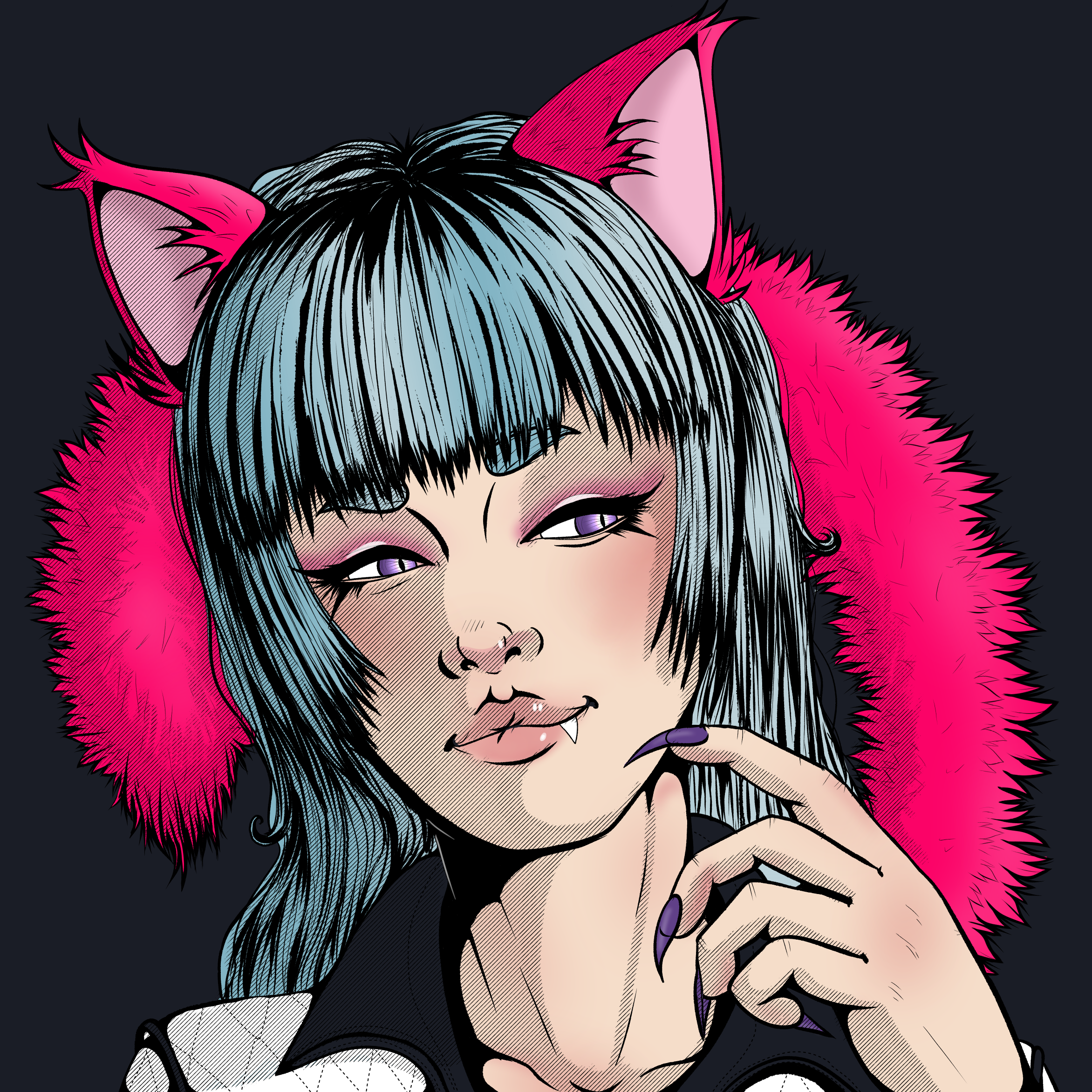 Delle is a fashionable catgirl-style tabaxi with violet eyes, a hot pink cat tail and ears, and long blue-white hair styled in a hime cut. She wears a super sick white bomber jacket with a gold scorpion embossed on the back and is herself a fashion trend-setter thanks to her lucrative gig as a popular Witch streamer. Though her true name is unknown, Delle grew up in a village run by the Catsuka, a tabaxi crime syndicate with certain ties to the Emperor himself. Delle met the boss's daughter, Kiku Matsume, as a singer in a Catsuka-run bar when she was in her early twenties, and the two began a relationship in secret. However, beginning to fear for her own safety and that of her family and community, Delle abandoned the volatile Kiku and escaped the village, drifting from town to town conning the rich with her charms and magic. Delle's family, according to legend, was blessed by a powerful fey spirit, a kitsune, and Delle can channel this magic into devastating offensive elemental and necromantic spells. Coupled with her natural charisma, Delle can also cast very high-level enchantment spells, a distinction that has earned her the spot as top caster in the party. 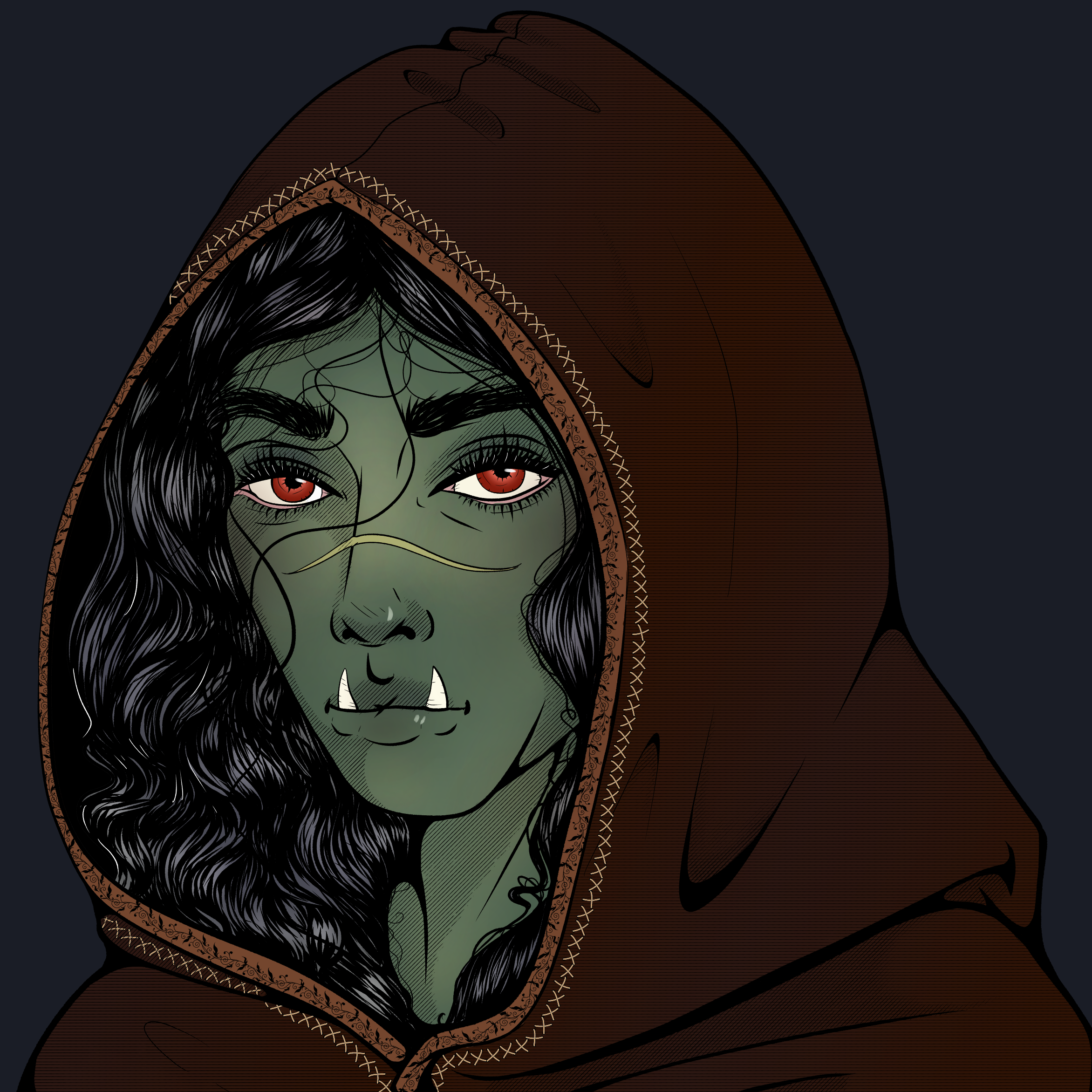 Furn is an unkempt, dirty half-orc with wild dark hair (recently cut quite short), red eyes, and a long horizontal scar across her nose. She can almost always be found wearing an old, well-worn dark green hooded cloak, though recently she's been keeping her hood down. Furn has no memory of her birth parents or of her life before being found in the deep forest by Flynn, a firbolg. From Flynn she learned how to survive in the wilderness, hunt and forage for food, map and chart the stars, and, as she grew older, the ancient secrets of druid nature magic. As their training in magic continued, however, Furn began to have strange visions of coming disasters and apocalyptic events that no medicine or meditation could cure. Knowing their destiny lay elsewhere, Furn bid farewell to their adoptive father and left the woods for the outside world. Furn has taken up the role as the party's healer, utilizing her constellation magic to aid her allies. In a pinch, however, Furn can use powerful radiant spells against their enemies, backed up by their skill with the sword and the common druidic ability to turn into animals. 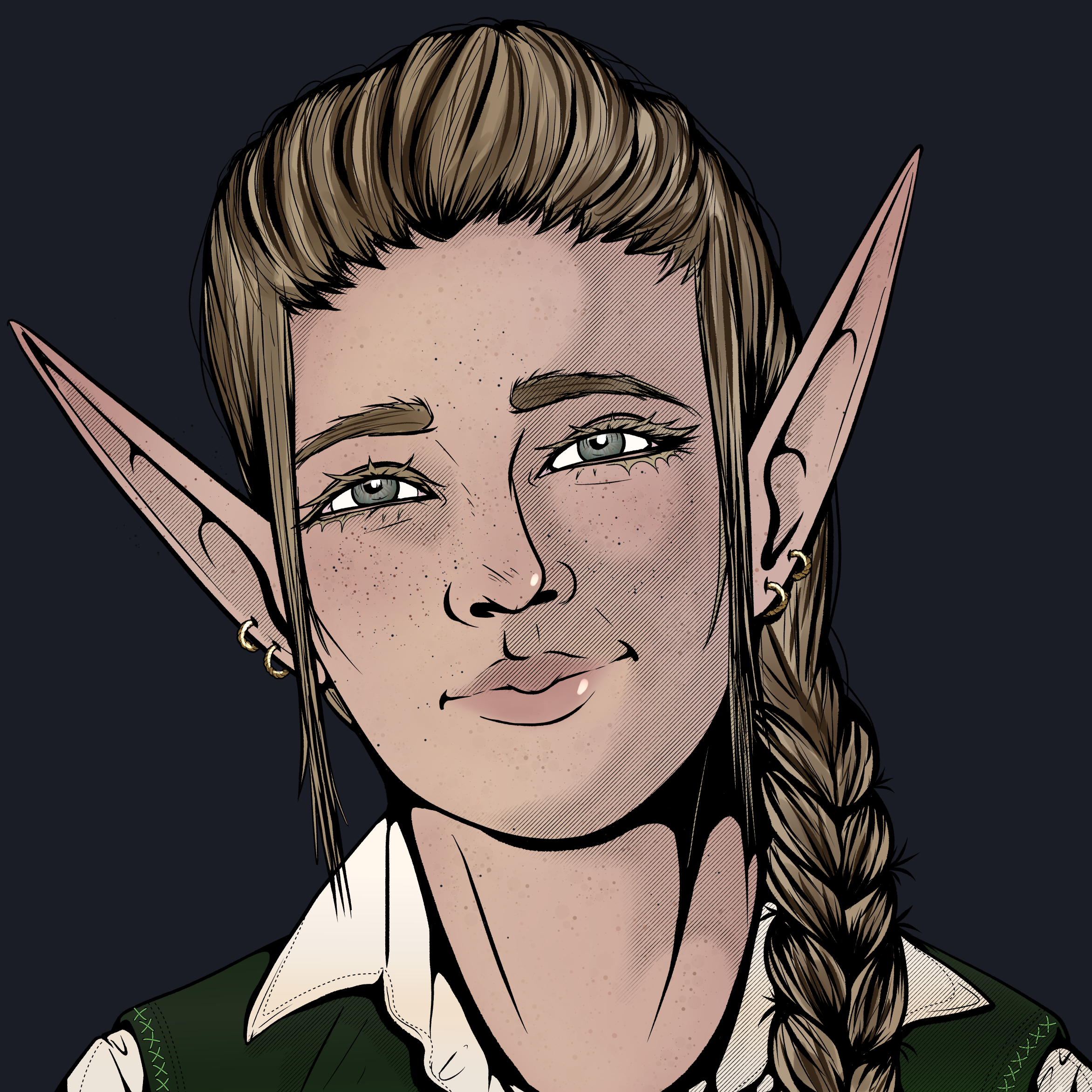 Warrior-princess and heiress to the throne of Arbor, Mara is a tall, muscular wood elf with green eyes and long tawny brown hair pulled back into an efficient braid. Mara wears loose athletic clothing for better maneuverability when fighting. As a child, Mara enjoyed living in Arbor during its Golden Age under the guidance of her two mothers and the rest of her large family, and she could often be found playing in the swamp outside the city. When the Emperor rose to power, he loosed Bungalow Jim on the kingdom, an assault which resulted in the death of Mara's entire family. Forced into the dangerous wilderness outside the city, Mara swore vengeance against the usurpers and began a harsh training regimen, using the perils of the landscape to hone her physical abilities as well as her ki. Mara is the only non-founding member of the Focussed Group, having joined during the group's journey into the Kingdom of Wood to retrieve the Alligator Knives. Mara is one of the party's frontline fighters, usually letting Pappy tank while she deals unbelievable amounts of damage to her opponents using lightning-fast martial arts. When not fighting with her quarterstaff, Mara kicks, punches, chops, and headbutts even heavily-armored enemies into submission, if not death. After the events of the Neon Elysium Arc, Mara learned several techniques regarding healing and necrotic damage, adding her support to Baja and Furn's efforts 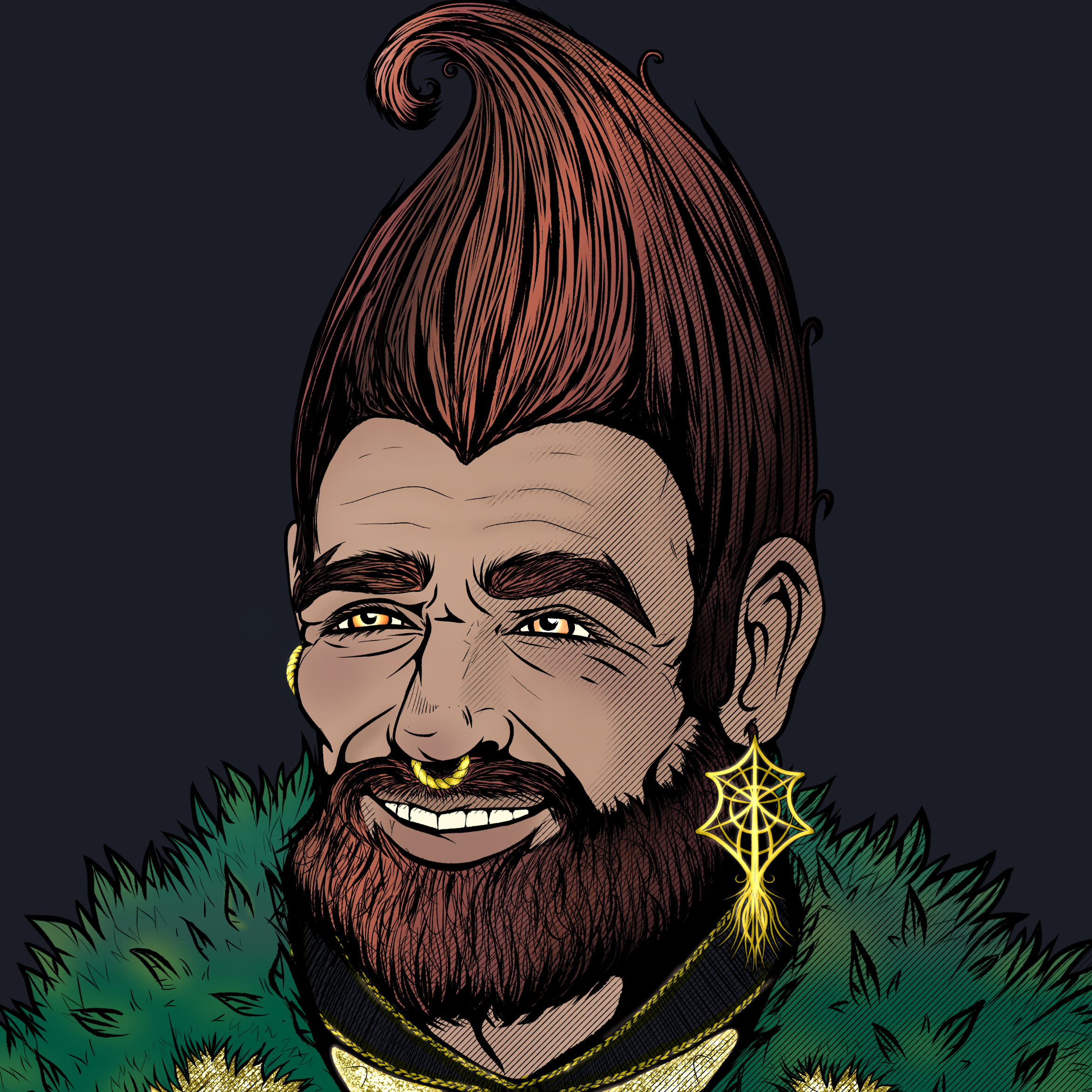 Pappy the Troll is the smallest dwarf alive, standing at exactly 2'2". He has wild red hair that curves up like soft serve, a red beard, and an assortment of gold piercings and jewelry. Aside from his gold tracksuit, green feathered cloak, and chunky sneakers, Pappy's most easily-recognizable feature is the enormous chastity belt that has been locked around his understuff for almost sixty years. Though a great deal of Pappy's past is shrouded in mystery, it can be assumed he enjoyed a relatively normal and stable upbringing with family and friends. On one day 57 years ago, however, Pappy visited a market and tried on a chastity cage only to lose the key in a nearby bottomless pit. His libido shackled, Pappy was thrown into despair, and continues to search for a way to free himself to this day. Pappy is the party's tank and absorbs damage like a sick little sponge. He wields a massive battleaxe like it weighs next to nothing and has even coined a signature move, the Pappy Special, which involves decapitating someone whether they deserved it or not. Pappy's sexual frustration also allows him to call on an elemental storm, wreathing himself in flames, lightning, or ice to aid him in combat. Note: it is unknown whether Pappy's height is related to the chastity belt, and no one wants to ask.